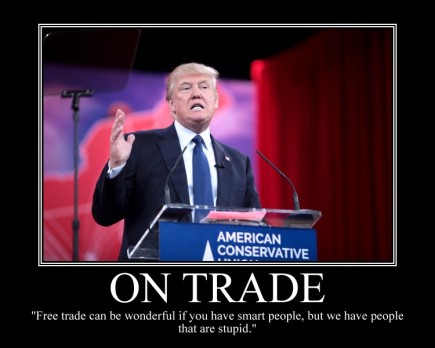 At the end of the 19th century the Republicans were the protectors of the monopolizing trusts of the Gilded Age. They of course through Harding and Hoover accelerated the Great Depression during the interwar-period. It was only after World War Two they became free trade supporters.

Likewise, the Democratic Party under FDR and Cordell Hull ushered in policies of free trade in the 1930s with the passage of the Reciprocal Trade Agreements Acts in 1934, at the depth of the depression. This remained pretty much the position of the Democratic Party until recently. Opposition to free trade increased throughout the 1990s and came full blown the last few years, even though President Clinton and President Obama were able to hold back this tide …. until now.

What’s my conclusion? The major parties have changed their positions on trade over the last 100 years or so. This is not a unique development. But it is  unfortunate that the position of both candidates for the oval office now represent a similar anti-trade position.

Globalization has certainly been a cause of this convergence. But other factors are at work. The best public policy as we go forward this to formulate domestic polices addressing the inequality that has developed because of the uneven benefits that stem from increased global trade.

This has not been done. For example, such policies include, better trade adjustment assistance, greater reinvestment into infrastructure by both the private and public sectors, and a better and a more positive attitude towards trade and the global system.

You can’t build a dike to hold back these developments. We need better policies by both the corporate and public sectors to engage more thoughtfully in the global system today, at all levels. Hopefully, the political parties will change their trade policies once again.