Aggressive Engagement with the Global Economy. 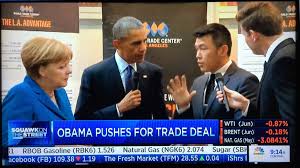 His description of the problem was particularly interesting and added one new element not heard before — the role of culture.

He argued that global anxiety is caused by globalization & this shapes negative attitudes towards trade agreements and multilateral institutions. He then focused on the role on culture that has contributed to this general ever-growing anxiety.

In particular, as manufacturing jobs disappeared so did a host of support systems, ranging from unions, local charities and church groups. This contributed to the failure to support those most of need  of support. He then concluded that we must address in a positive manner these issues. But not turn back to the many forms of protectionism.

A number of other articles have discussed all of this with reference to Donald Trump, growing income inequality, and implications for the passage of the TPP. All of these issues were touched upon by President Obama either explicitly or implicitly.

The policy remedy is to recognize generally the changes brought about by globalization. But the answer, in particular, is aggressive engagement with the global economy at all levels of government and society. Not building walls of protectionism.

What do they say? The best defense is a good offensive. There is no alternative. History has proven this proposition.

1 Response to Aggressive Engagement with the Global Economy.