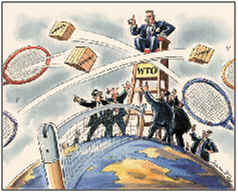 By omitting this language, “provided in the covered agreements,” the report suggests that nothing can be decided against the United States since the United States had never been committed to anything. Therefore, whatever was decided or may be decided concerning the United States was per se in violation of U.S. rights and sovereignty. This is grossly misleading and incorrect.

Simply put, Article 3 and Article 19 recognize that the United States contracted, in agreeing to the whole range of WTO agreements, to a broad range of rights and obligations. “Covered agreements” refer to the family of WTO agreements that all members adopted.

Article 3 states that the purpose of the DSU is to bring about a “prompt settlement of situations” and “the maintenance of a proper balance between rights and obligations of Members.” The principal purpose of the dispute resolution system is not to deter future actions but to lift trade restrictions not consistent with WTO agreements.

As part of these agreements, the dispute settlement system is authorized to interpret such rights and obligations assumed under the WTO agreements and then recommend to the United States to bring inconsistent actions into conformity with those agreements. It does not award money judgments. The jurisdiction of the WTO is indeed compulsory. A member cannot opt out of it. This is the crux of developing a global trading system based on the rule of law and its adjudication.

By the way, the DSU does not invalidate national legislation nor declare illegal any contested action. Article 19 merely recommends bringing them “into conformity” with WTO obligations and leaves it up to the United States to best determine how to do this.

This process is simply the core basis of the rules-based system that benefits everyone and promotes global trade. It provides for the peaceful settlement of concrete trade disputes. It provides a mechanism for applying trade rules already negotiated by the parties. What’s the sense of negotiating trade rules if they are not enforceable? The WTO provides a neutral forum for the interpretation of such rules. The WTO has proven to be the primary enforcement mechanism of trade obligations.

The United States was the primary architect of this system. It, along with the global community, is the beneficiary of putting global trade relations on a consensual basis that rejects power politics. The DSU has proven to be the most successful part of the WTO, especially after the failure of the DOHA Round. In fact, from 2001-2014, the United States won all seven cases filed against China. The DSU is in the global trade and national security interests of the United States.

One last point: It’s not good policy for lawyers to draft misleading legal arguments by misstating the law, by omission of key statutory or treaty language. This is never a good idea. It’s also sanctionable by state bars.