Posted on December 9, 2016 by Stuart Malawer 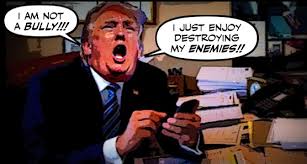 Trump has engaged in cyber shaming and this should be held up as a model. As a model for all school children of what never to do.

Trump’s soul is one of the architype scrooge in real estate. Bluster, don’t pay your contractors, nor investors, and then file bankruptcy while deducting other people’s losses resulting in no tax liability for years.

How will this play out in the world of diplomacy, international affairs and National Security?

There is no doubt in my mind it will be disastrous. Why?

For example, real estate negotiations to purchase property is essentially a zero sum game. As a buyer you get a lower purchase price and the seller gets less. You save money, the seller loses money. That winner-take-all approach is not going to work in a world where there are so many variables to consider. There is a multitude of national interests and power positions to assess as well as a global networking effect that magnifies unilateral actions.

What about bluster and fear?

I can tell you that historically even if a country gets its way initially as to an international agreement, as soon as circumstances change, the agreement will be repudiated and thrown out. Such unequal agreements are often the seeds of a newer and fiercer confrontation.

Just look at what happened after the Versailles Peace Treaty that ended World War One. This treaty led in great part to the rise of the Nazis in Germany, to the overthrow of the Weimar Republic, and in a few short years to World War II. China is still unhappy about a wide-range of colonial era and other agreements imposed upon it from the Indian border to the Russian border.

By the way Hitler was democratically elected and then appointed as Chancellor of Germany. To a great extent this resulted from the immense  resentment to the grossly one-sided peace treaty and grave economic stress caused by a U.S.-inspired trade war and the Great Depression.

What’s my conclusion concerning Trump’s foreign policy over the next four years? Buckle up. We’re in for a ride. It may not be good.