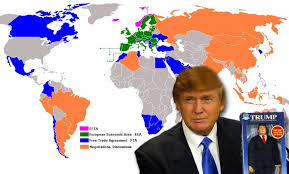 ‘The Donald’ aka ‘The Trade Trickster’ disparages current trade agreements, ongoing trade negotiations, globalization, US trade policy, U.S foreign policy, and US national security policy. Hope this doesn’t reflect his education at the Wharton School which he constantly reminds us of.

I’ve written before as to his wildly delusional views on these issues. But here are some additional thoughts:

My conclusion is that while Trump may know something about real estate and hotels, although even that has been called into question for a long time, the world is different from the world of real estate deals in New York or the world he grew up into in Queens in the 1950s and 1960s. Which he doesn’t seem to have transcended and to be stuck in. Not even the Wharton School could get him to understand reality and how it changes.

For The Donald trade policy, foreign policy and national security policy are fact free zones informed only by his own inner being. This is not good for anyone not even him.