Now it is the New York State’s Department of Financial Services(DFS) that has issued an order threatening the license of Standard Chartered Bank to do business in the state.

It alleges that the British bank schemed with the Iranian government to violate U.S. financial sanctions for nearly a decade.  It contends that the British bank used its New York branch to mask more than 60,000 transactions and thus laundered over $250 billion since 1995. It did this by stripping the true identity of the parties involved in “U-Turn” transactions involving foreign entities utilizing the U.S. clearing system.

What was the British bank’s response? “Who are you to tell us, the rest of the world, that we’re not going to deal with Iranians.”

And this is from one of our closest allies. I suspect the bank is going to face not only possible loss of its license but massive private litigation and criminal prosecution. I guess they will find out who they are dealing with.

…  Why do global financial institutions (Credit Suisse, Lloyds, Barclays, ING and HSBC) think they can violate U.S. legislation when they act within the United States?

… What is it with the British and foreign banks that they feel that U.S. sanction legislation can be violated? (Think about countries other than Iran such as Mexico, Cuba, Myanmar, North Korea and the Sudan.)

… Is it just the fees in this case or does this instance evidence a systemic issue concerning global finance and U.S. sanctions?

… Do such corporate actions indicate an ineffective global financial regulatory system based primarily upon national legislation?

… Should the U.S. actually hold individuals criminally responsible or just go after the license to do business of a foreign bank?

Obviously policy needs to catch up with global corporations acting in a multi-jurisdictional world. Global corporate responsibility needs to be reinforced by effective national and international supervision.

There is a blurring of the moral and legal responsibilities of global financial institutions in the pursuit of profit. This is a problem for national and global systems. That’s the challenge we face.

And that’s why this is our business. 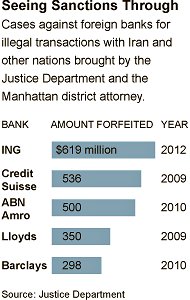