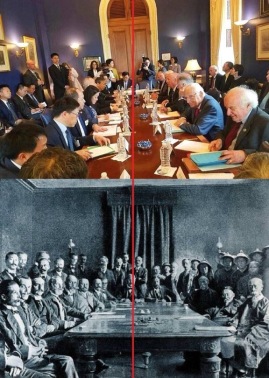 The interrelationship of public international law and U.S. constitutional issues is of paramount concern today. However, it’s unfortunate that neither universities nor public policy communities have fully grasped this in connection with the Trump administration actions.

This is especially the case in light of unprecedented challenges to both the international and the constitutional legal systems that current United States policy presents. It is the Trump administration that has more than any other administration forced these issues to the forefront. They need to be addressed, now.

To illustrate the above here are some issues that need to be examined by law professors and foreign policy experts………….

What is the President’s authority to terminate a treaty unilaterally when not complying with the withdrawal provisions of the treaty? (Keep in mind that there is nothing in the Constitution about terminating a treaty.) What if there is implementing legislation? Can the President still terminate a validly negotiated and implemented treaty? (Think about the TPP, the Paris Agreement or the Iranian Nuclear agreement. And Trump’s treats concerning NAFTA and the WTO.)

Since customary international law is deemed by the Supreme Court to be the supreme law of the land is the President bound by it? Can he ignore it? For example, by negotiating terms of international agreements that have been deemed unlawful? (Think about the voluntary export restraints in the new U.S.-Korea agreement.) Can the President violate customary international law (Article 52 of the Vienna Convention in the Law of Treaties) and threaten the use of military force in order to coerce another country to enter into an agreement?

Think about the current Iranian and North Korea situations today and even U.S. trade negotiations with China. The Article 52 rule that voids agreements brought about by the threat or use of armed force was adopted to not give juridical recognition to the type of military threat by Nazi Germany in bringing about the Munich Agreement in the 1930’s. (And older ones with China.)

What should be the role of U.S. domestic courts in the international legal system?

Should courts limit the defense of sovereign immunity in actions concerning terrorism and torture? Should courts apply constitutional protections to actions by the U.S. military and intelligence agencies outside of the U.S.? Should courts be required to look to international law and foreign law in interpreting U.S. laws? To what extent should foreign plaintiffs (individuals and corporation) have standing to utilize U.S. court to enforce their international legal claims? (Think about international human rights violations.)

Constitutional and international law are most often taught as discreet courses and often dealing with esoteric and philosophical perspectives. It is necessary today to focus on the inter-relationship of these courses in the context of foreign policy issues. Both in a professional and real world context. This is the critical challenge today — for both these subject areas — in order to stay relevant.