Iranian Assassination & Global Trade … Not Good for the Global Economy

The assassination of Major General Suleimani of Iran was a terrible blunder on many levels.

One level that has not been talked about much is its potential impact on global trade.

To me there will be a significant impact, sooner than later. President Trump has already imposed new sanctions on Iran and threatens Iraq (for trying to force out US troops after 16 years). His disregard of U.S. and international law is stunning. His entire personal history of litigation has proven to be his template for governing as president and conducting international relations.

The Persian Gulf states are beyond nervous. So are the Europeans and the Japanese. Transit of oil through the Gulf is an obvious target. The price of Saudi Aramco stock (after its massive IPO) has already taken a hit. Price of gold and government bonds have risen. The price of oil has become even more erratic.

Things are not going to get better for anyone, anytime soon. U.S. threats to target Iranian cultural sites are unnerving and illegal, constituting war crimes if carried out. This newer reality is really, really unfortunate.  The risk of this situation unraveling is very great.

This threat to the global economy is a  foreseeable spinoff of an impulsive military action ordered by the United States president. The president’s decision is a stain on American diplomacy.  Worse than the sellout of the Kurds. I wonder where were the U.S. military and intelligence communities in this process.

You simply cannot rationalize the president’s action and tweets. There is absolutely no strategy here, whatsoever.

Doesn’t anyone in the administration read diplomatic or world history? Or even some basic American  foreign policy? One immediate remedy is for the congress to reclaim its constitutional war powers. Most importantly, foreign policy and national security must now become central to the 2020 election. 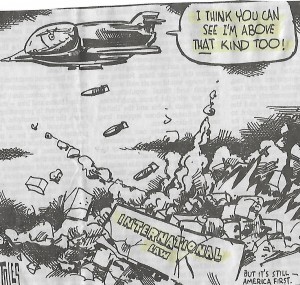